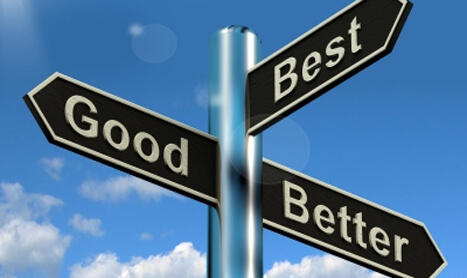 A few weeks ago, I had to let two people go. Two really good, nice, decent, hardworking people. People who, in the past, I’d have probably kept on much longer than the nine months they worked for me.

I always tell people that firing someone who did you wrong is easy. Someone who lies, or cheats, or steals, or treats another employee badly is easy to fire. There is some vindication in taking out the trash in those situations. Firing someone who simply couldn’t cut it, no matter how hard they worked, is not easy. Everyone feels bad when that meeting ends, and usually, there are some tears shed.

I’m a soft-hearted person. Tony, my business partner, has always said that about me. Most of the time, it’s a strength. My employees know that I care about them and their families and their well-being, and they appreciate it. But without some parameters, being soft-hearted can also be a weakness. It can make you wait too long to have a difficult conversation, or to delay terminating someone who is super nice, but just not working out. I’ve been guilty of both of those in the past. But I can honestly say that in the past year, I’ve been able to make some really hard decisions about folks, and hold to them, without feeling guilty or bad, or like I’d hurt someone. The difference? Standards. High standards. Unmovable, unshakeable, non-negotiable standards. Having clear-cut, non-negotiable standards has made it easy for me to make consistent, fair decisions about our sales team members and to create a sales team of high performing individuals as committed to their own success as I am to the success of Legion. And I’d encourage anyone who runs a sales team to do the same.

First, some backstory about the process. Tony and I have always had the intention to have a high-performing sales team. We are both high-performing salespeople, so we thought that leading by example and hiring well, we’d make it happen. And that works some of the time. But people also need targets, and goalposts. Our sales manager, when we promoted him, needed a way to objectively judge the team and see who needed help and who might need to go. For years, we experimented with different goals, markers, targets, etc., but we never had a system that we felt unshakably confident in. Finally, last year, we sat down and had a hard conversation as a management team. We are paying a higher base salary now than we ever have for our salespeople. The market dictates it and if we want to attract good sales talent, we have to. What that means, though, is that our expectations as a company have to be higher for our sales team. Salespeople are a profit center, not a cost – they have to cover their expenses and add to the bottom of the line of the company if it is going to be worth having them on staff, and we had to get really real about what that meant. So we did the math, and we figured out the bare minimum a salesperson has to bring in, on a weekly basis, to justify their spot on the roster.

Once we had that number, we updated everyone’s expectations, had conversations with the folks who weren’t at that target, and then put everyone below that line on a three-month performance improvement plan to get them where they needed to be. We made sure our sales manager was going over the standard in every one-on-one weekly meeting, was setting targets around leading indicators of success (prospects added to the system, phone calls made daily, etc.) and that all our salespeople on the cusp were updated, weekly, on their progress. We lost one salesperson immediately who felt our standards were unreasonable. Another quit a little further down the line when he felt he was never going to get his numbers where they needed to be. But everyone else buckled down, and worked, to increase their sales and meet the target we’d set.

But not everyone was able to. At the end of the three month performance improvement period, we had one salesperson who we all loved, and who was a generally cheerful and nice guy, and who had been a part of the Legion family for quite a while in different roles, but who just couldn’t get his numbers up. And that’s when things got hard. We had a choice to make – we could either allow our emotions, and our soft-heartedness, to take over and give this man, who’d had quite a few “second chances” in his time with us another shot, or we could hold to the standards that we knew were fair and necessary, and had to exist to make us successful. And in a shock to everyone, I came down on the side of standards, not emotions. I saw that if we let it slide this time, not only would we have a precedent of ignoring our standards that would make future decisions much more difficult, we’d be telling everyone that sure, we said you had to hit this target, but you don’t, not really. If we truly believed in our standards, it was our obligation as leaders to be unwavering in their application.

I’m not going to lie – that termination sucked. But I believed in my heart it was the right thing to do. I knew we were doing the right thing for Legion, and if there’s one thing I’ve said since the beginning, it’s that my first priority as an owner has to be the health of the entire operation. Sometimes that means making tough decisions for one individual that will preserve the company for the other 30 people I employ.

Fast forward two months, to last Friday. I had two folks who had gone through our entire nine-month training process, but who had failed to hit the required sales targets to stay with us. In nine months, you really get to know someone, and like them. I knew and liked both these folks, but it was obvious to me (and to them, as they admitted in their exit interview) that Legion wasn’t the right sales job for them. They loved the company and the people and even the industry, but the sales side of things had just never jelled. We were all sad in their exit interviews, but they also said they appreciated the fact that we were transparent from the beginning about the expectations of the job. They were sad to be leaving, but not angry or surprised that it was happening.

I know that going forward, there are going to be more of these types of painful conversations. No matter how precise we get in our hiring, we’ll never be perfect. There will be folks who miss their targets and even when given time to correct course, will not be able to. Those people will have to move on to another opportunity, hopefully one that is a better fit for them. And it will be our job to enforce the standards we’ve set to ensure we have the right people in the right seats for our organization to thrive. Taking the emotion out of it doesn’t make a termination easier in the moment, but it does make the decision-making process much simpler. It becomes a matter of numbers, not of how much you like someone as a person. And even the most soft-hearted of us can do something hard in that situation.

Use the best free HTML tools: read the blog, use the online editor, find the tags.

Any cookies that may not be particularly necessary for the website to function and is used specifically to collect user personal data via analytics, ads, other embedded contents are termed as non-necessary cookies. It is mandatory to procure user consent prior to running these cookies on your website.